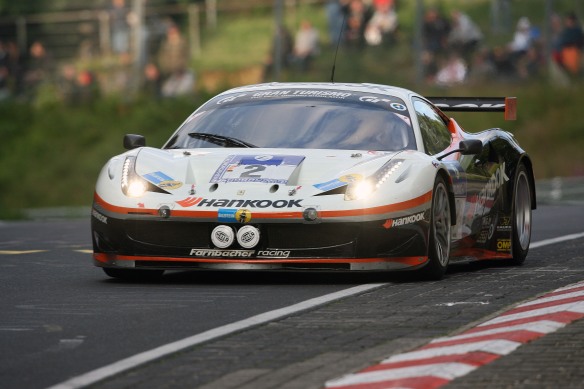 Following the confirmation of multiple high-profile teams and driver lineups in recent weeks, the 2012 running of Australia’s Bathurst 12 hour event has received a further addition to its growing number of provisional entries.

In an interview with Australia’s Speedcafe.com, Danish driver/endurance regular, Alan Simonsen has revealed details of his planned return to the 2012 event with Australian team, Maranello Motorsport. Simonsen also provided information regarding the team’s planned driver lineup.

On this occasion Simonsen will be partnered by regular Le Mans series driving partner, Dominik Farnbacher. In addition to Le Mans series duties, Farnbacher’s current portfolio sees the young German compete in the ADAC championship, and select endurance events in both the US and Europe.

Having achieved podiums at both Le Mans and Nürburgring 24 hour events in recent years, the duo are well-versed in the art of endurance. The pairing will be partnered by Australian drivers John Bowe (past V8 Supercar driver/multiple Bathurst 1000 champion), and local gentleman driver, Peter Edwards.

Following a sixth-placed finish in the 2011 edition of the race with Ferrari’s aging, Kessel-built F430 GT3, Maranello Motorsport will field a 2011-spec, Ferrari 458 GT3 chassis in the 2012 running of the event.

The Melbourne-based squad will compete against factory entries of Audi, and potentially other marques, in a bid to secure outright honours amongst a small, but highly-competitive field of GT3 runners.

Providing further testament to the event’s increasing international allure, confirmation of the talented duo’s planned Bathurst assault affords greater substance to a growing list of both local and international entries for the 2012 edition of the race.

Simonsen provided the following statement regarding the announcement to Speedcafe.com:

“It’s clear that this year, the teams going for the win pretty well ran three professional drivers, so you’ve got to put a strong team together to be in with a shot.

The 458 is a new spec GT3 car, so it should match the Audis that were there this year – I certainly don’t think you’ll see them running away with it again.

Audi is obviously strongly behind it, and we’re expecting Mercedes to give a fair bit of support to next year’s race. I think it’ll grow and grow – I think it’s going to be a big thing.”

Preparing for a factory onslaught against Audi, Peugeot, and potentially other marques, the 2010 Le Mans P2 champions will likely fly the sole Honda flag within the new World Endurance Championship. At least for the foreseeable future.

As part of the outfit’s long-term strategy, the multi-year, factory endorsed programme will see Strakka campaign an HPD chassis for three years. Commencing in 2012.

As with past programmes, the project will again be a collaborative development between California-based HPD and British firm, Wirth Research.

Reportedly an entirely new chassis design, the car will bear the designation ARX-03a and, according to Wirth Research founder/director, Nick Wirth, development has taken into consideration many lessons learned from past 02a, and 01e LMP1 designs.

In addition, the package will be powered by a naturally-aspirated, HPD 3.4L powerplant. Further technical details are not yet known.