Following a second place finish at the emerging Sepang 12H event earlier this year, the announcement arrives at a time when Joest attempt to expand their customer sport portfolio, with the illustrious firm now offering its factory-support services to AudiSport customers around the world.

Driver lineups for the event were also unveiled. The squad’s first entry consisting entirely of locally-sourced drivers, with Penfold AudiSport team owner, Mark Eddy partnering reigning Bathurst 1000 champion Craig Lowndes, and V8SC endurance specialist, Warren Luff. Despite a lack of prior experience with Audi’s R8 LMS, both Lowndes/Luff are arguably the most suitable candidates for such an undertaking as a result of race miles alone, accrued on the legendary circuit.

Craig Lowndes responded to the announcement with the following statement:

“Team Joest and Audi Sport have a reputation for being the best in the business, much like Team Vodafone in V8 Supercars, so when they rang it was impossible to say no! I’m excited to be joining the works Audi team for this race and to be teaming up with some great drivers like Mark and Warren.

The R8 looks like a fantastic car and I can’t wait to get behind the wheel in February. Long distance racing is a great challenge, especially when you get to an amazing track like Bathurst, and it’s a challenge I’m looking forward to. It should be a great race.”

The team’s second entry will consist of an all-professional lineup, with German drivers Marc Basseng and 2009 FIA GT3 champion, Christopher Mies joining Canadian ace, Darryl O’Young. Although having never contested an event at the Mt. Panorama circuit the trio are no strangers to endurance, boasting collective starts at the Nürburgring 24H, Le Mans 24H, Sebring 12H, Spa 24H, and Sepang 12H events, in addition to GT1/GT3, ADAC, and VLN duties.

“Having a team of this calibre commit to the Armor All Bathurst 12 Hour with two cars is a fantastic show of support for the Event. I was fortunate enough to see the Audi team in action at Sepang (Malaysia) earlier this year and they are hugely professional as you would expect.

Their participation is sure to bring further international exposure to the Event and we look forward to welcoming the team and drivers to the Mountain in February.”

“For the structure of our new customer sport programme, Bathurst is certainly the perfect place to begin the season. Seeing the Audi R8 LMS in operation will certainly be a great experience for the fans.”

Although in recent years the Bathurst 12 Hour had been relegated to the domain of primarily amateur and gentlemen driver entries, organisers have openly expressed an intent to lure further international interest and, with the adoption of new regulations, aim to expand the depth of the field with additional factory-supported and professional entries in future years.

Up until recently the 12 Hour event had been restricted to a production-based field of Saloon and Touring entries. Only in recent times have organisers modified event regulations, allowing the inclusion of GT3 class machinery.

The 2011 rendition of the event will run from Februrary 4-6 and, for the first time, will see the 6.2KM circuit play host to a variety of world-class GT machinery, in addition to a thriving support field of production-based saloon and touring entries.

Penfold AudiSport's R8 LMS during an AustralianGT meet at Sandown.

Following months of rumours and intense speculation within the sportscar racing community, AudiSport today revealed its next generation LMP1 chassis, the R18 TDi.

After achieving nine victories utilising the advantages afforded by open-top roadsters, Audi’s launch of the R18 TDi marks the manufacturer’s second foray into the use of closed-cockpit prototypes, following the use (and subsequent shelving) of the R8C Coupe in 1999.

Manufactured by Dallara, Audi’s latest LMP chassis is quite clearly a product of evolution, utilising a similarly radical (albeit simplified), raised-nose flow design pioneered by its predecessor.

With 2011 LMP1 regulations stipulating the use of both smaller chassis and engines, the R18 arrives sporting a variety of improvements from shortened wheelbase to new engine package. As had been suggested by numerous sources, Audi has confirmed the use of a 3.7L V6 TDi powerplant and, although the nature of the cooling system would suggest the use of a twin-turbo system, this has not been officially confirmed.

Although finer design details were at first overshadowed by the mere revelation of an Audi coupe, a closer observation reveals the effort invested thus far, with updates having taken place on virtually all of the chassis’ viewable surface.

Sidewall height has been reduced, with rear wheel-archs now extended forward, protruding over what was previously occupied air-intake real estate. Due to the demand for increased mechanical grip, front tyre width has increased and, as a result wheel archs are now heightened and much more pronounced.

The expected addition of the now mandatory ‘sharkfin’ concept can be seen adorning the cars’ rear bodywork. Some form of additional practicality appears to have been achieved, with the fin attached to a now roof-mounted air intake system. The purpose of this modification is not yet known.

Adding to the growing list of overhauled components, halogen headlights have been removed in favour of LED lighting. Despite this, the LED-strip lighting that once adorned the surrounding area of any Audi’s headlights (a feature which became synonymous with the marque’s racing machinery) is no longer evident.

Despite the likely presence of an R18 in Florida during March, Audi has ruled out any possibility of a Sebring debut for its latest LMP. Electing to participate regardless, the team will utilise a modified version of its current R15+ chassis for the 12 hour event.

The R18 will instead make its first public track appearance at the reinstated Le Mans test day on April 24, its maiden competitive debut following shortly after at the 6H Spa on May 8, 2011. 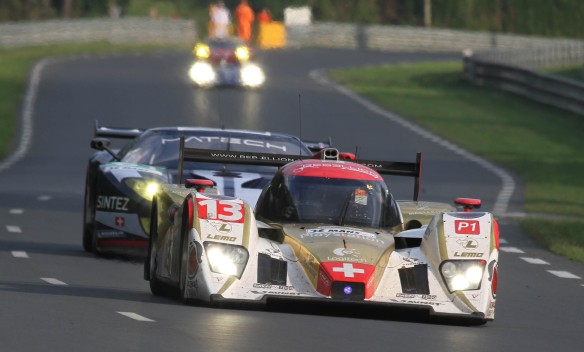 Following a successful 2010 campaign, Rebellion Racing today confirmed the suspicions of many within the sportscar racing fraternity. During a press release, the Swiss team publicly announced the formation of a technical partnership with Toyota Motorsport.

As suggested by brief reports leaked weeks earlier, the agreement sees Rebellion Racing emerge as the official and exclusive partner of Toyota Motorsport within the LMP1 category for the 2011 season, with Toyota Motorsport supplying engines and technical assistance to the squad.

Although technical details regarding the engine package are not yet known, the origins of the powerplant are believed to be of SuperGT derivation and, with the team having reportedly completed successful tests with an interim package in both Portimao and Barcelona, development is already well underway.

Having secured contract renewals for Jani, Prost, Belicchi, and Boullion, the team also confirmed the return of its regular driving outfit for the 2011 season during the announcement. Additional drivers for the 24H have not yet been announced.

“We are delighted to partner with Toyota Motorsport and we look forward to working alongside them, with this company with a rich history, ranging from Formula 1 to Le Mans. We look forward to establishing a solid relationship with them based on the long term. ”

Although currently a ‘toe-in-the-water’ approach, the news is perceived by many as the first tentative steps toward a possible factory return, and perhaps an early signaling of intent by the auto-giant to rectify unfinished business with Le Sarthe.

The schedule will again feature five rounds of competition, three of which will coincide with ILMC events. Despite the removal of the Hungaroring as a post-Le Mans feature, the series will now visit Italy, with round three to be hosted at the famed Imola grand prix circuit.

The provisional schedule sees the series return to Portugal once more but, having taken into account obvious criticisms from teams, fans, and sponsors, the event has been moved to a later, more convenient date, playing host to the series finale in late September.

With an alternate race format adopted for the Intercontinental Cup, events coinciding with ILMC rounds will now operate with a priority on timed races, as opposed to the distance/time combination (i.e. 1000km/six hours) used previously. Whether series organisers intend to utilise this format outside of ILMC competition remains unclear.

The provisional calendar (subject to FIA approval) can be seen below: